Youmay or may not be a fan of "The Sopranos," but you've probably heardabout Jamie-Lynn Sigler, the 21-year-old actress who plays Tony's daughter,Meadow. Jamie's autobiography starts with her dance lessons at age three and endswith her as a TV star, but the most interesting parts of her life happen inbetween. She doesn't hold back about her first crush, how she tried to be perfectat everything, how she felt ugly and fat next to her ex-boyfriend'sex-girlfriend, and, finally, how she almost died from anorexia.

This iswhere the self-help part comes in. Jamie has gone public about her eatingdisorder and how it almost destroyed her, both professionally (she came veryclose to losing her role on "The Sopranos") and emotionally. Here, shetells readers that they are not alone with their weight worries, and evenprovides addresses and phone numbers for hotlines and groups to contact if you'restruggling with a weight problem.

Finally, Jamie proves you can overcomeyour problems and come out on top by telling how she achieved her greatest dream,which has nothing to do with wanting to be famous.

What is most intriguingis that Jamie's feelings and emotions seem so normal. I was shocked by howsimilar Jamie is to me. I, too, want to be an actress, and found it helpful toread about her start in acting and how she got her role on "TheSopranos."

But aside from sharing similar dreams, I've constantlyfelt like I have to be great at everything, that I can't please anyone, that I'mtoo fat, too short, too whatever. Well, I'm not overweight and I'm not too short,but like Jamie, these ideas often control my thoughts. I used to think it wasjust me, and if I hadn't discovered this book, I would probably still think so.

But now I know that this is a normal part of a teen's life, and that manyhave felt the same way at some time. And I have Jamie-Lynn to thank for making merealize that. 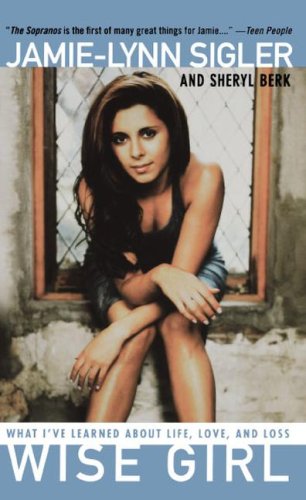