Island of the Blue Dolphins by Scott O'Dell | Teen Ink

Island of the Blue Dolphins by Scott O'Dell

The Indians of the Island of the Blue Dolphins have been massacred by foreign Alaskan Aleuts. Only the women and a few men remain alive. They struggle to survive now. When a ship sent by the Santa Barbara Missions comes to rescue them from the island, they all agree to leave. The ship is sailing away when, from the deck of the ship, Karana sees that her brother has been left behind. She dives overboard, and the ship sails on.

Her brother doesn’t live long, and Karana is left alone on the island. She must learn to live alone, hunt, and protect herself. At first she expects the ship to return soon, and doesn’t make too many preparations. Then, as time goes by and there is still no ship, Karana must decide if she wants to stay on the island alone, or try to follow by herself.

Scott O’Dell has done an amazing thing in writing this book. He wrote from the point of view of an uneducated twelve year old girl, yet the story is so believable. His portrayal of her voice is so realistic that we don’t think to question what Karana says. The reader believes that Karana is speaking. Her voice is simple and truthful, and tells us exactly what we need to know.

It doesn’t sound exciting to read a book where there is only one person. Reading Island of the Blue Dolphins, it is. O’Dell doesn’t make Karana go on and on about her loneliness, but we see it anyway in the things she does. Despite the fact that Karana rarely speaks out loud, the reader doesn’t think this is jarring. We get to know Karana through her actions and thoughts. Over time we see how she changes, but only at the very end do we see how much time has really passed, and it’s a surprise. The reader isn’t constantly reminded how long Karana has been on the island alone. We don’t feel like the years are dragging past, we just feel what is going on in that moment.

Island of the Blue Dolphins is a rare read. I would definitely recommend it. 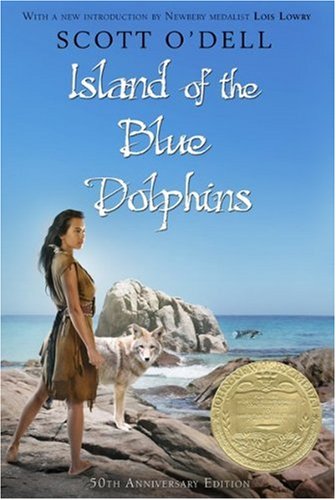