“They told me screaming meant death. Acting like I was a human child meant death. Disobeying orders meant death. And then I was silent.” This is one of the many incredible quotes from the new young adult novel that is rocketing to the top of the charts. Reboot is a stunning debut by Amy Tintera that has romance and action and teaches about finding self-confidence and to standup for what you think is right. Amy Tintera's novel took me by surprise to say the least. What I liked most about this book is that it is beautifully written and has a unique idea. Reboot is about a girl named Wren who is shot in the chest three times when she was twelve years old. Wren wakes up 178 minutes later from her death but with a price. She is now a Reboot, a genetically engineered human who is better, faster, and stronger than the average person. She also has hardly any human feelings left after being dead for so long. Wren is one of the best soldiers at a facility called HARC, which is used to train and house Reboots. Wren is a trainer at the facility and she always has first pick of the new Reboots that come in.
When she meets Callum, a strange boy who has only been dead for a record low of twenty two minutes, she decides to train him and try to make him a better soldier. When the head of the HARC decides that Callum should be eliminated, Wren decides at maybe the HARC doesn't always know what's best for her and for the other Reboots. I really liked the whole idea of the story. People who were already dead were brought back to life but they weren't human exactly. These genetically mutated humans aren't really androids either but something new that Amy Tintera was brilliant enough to bring to life. It's sick and disgusting to think about humans being brought back from the dead but at the same time it's strange and new to the dystopian world.

Callum and Wren. The chemistry in this book is intense and steamy at times but also pulls on the heart strings at just the right time. At the beginning, Callum and Wren have something that we would call "tough love". Part of training at the HARC is for the trainers to break their student's bones so if it happens in combat, they will know how to deal with the pain and learn to put their bones back in place. Gross? Absolutely. But smart. Callum lets Wren break his bones and doesn't scream like Wren thought he would but he's still not strong enough. The thing is that he's sweet and thoughtful and confident in what he believes is right which is a quality I deeply admire. I enjoyed seeing Callum and Wren's relationship grow throughout the book and seeing two totally different people (or should I say Reboots) come together and love each other despite their differences.
Reboot is perfect for someone who is looking for a fresh new dystopian trilogy that has guns and kick-butt fighting as well as endearing romance scenes that will make you swoon over this epic love story. Amy Tintera deserves two thumbs up. I can't wait to hear more from this author and see where she takes us with Callum and Wren. 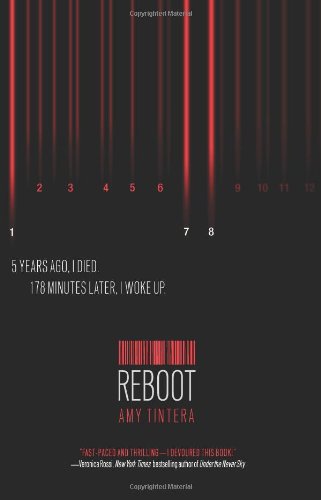