The air was like an apple- crisp, cool, sweet- with a changing breeze rifling through the blushing trees. Lynn’s shoes had long since been thrown off. Dancing on the morning dew in bare feet was just too tempting. Her bright, colorful skirt swirled around her shins. The grass stuck to her feet as she skipped and twirled, ignoring her brothers, who were playing catch a few feet away. She hummed music under her breath.

Lynn twirled until she was too dizzy to keep going. She collapsed at the base of a slender tree, giggling, feeling the dew on her arms. This could only be better if she had a friend to share it with. She opened her eyes, watching the world seem to spin above her, slower and slower until it came to a stop. This tree hadn’t yet changed color. The leaves were green. Several of them came floating down around Lynn like fairy wings fluttering on the breeze.

The tree was a weeping willow, one of two on the banks of a small stream at the retreat center. The stream was one of Lynn’s favorite places- it burbled happily at the bottom of a grassy ditch, and no one else stopped to listen to what it might be saying, so Lynn had it all to herself. The willows were quietly swaying in the breeze, swishing along to the music of the stream. Gazing up at the branches of the tree, she began to form an idea. The branches were long and flexible, like vines. If she held onto the vines, she could jump and swing.

It was, to four-year-old Lynn, a brilliant idea. She was always looking for new adventures. Grabbing a giant handful of branches, she began to think of a story. Now, I am a princess, escaping an evil wizard who wants to lock me up. I have to fly on the back of my dragon to get away! She ran and lept into the air, and the branches swung out over the grass.

For a moment, it was amazing. The wind rushed through her hair and her skirt whirled around her dangling legs. She let go at the highest point the branches brought her to, and she soared through the air, weightless- until she hit the ground, landing on her knees and catching herself with her hands. She forgot to breathe.

The grass was thick and coarse, slippery with stream water. She almost slid down the slope of the ditch into the stream before she realized that she had leapt clear over the ditch and landed on the other side. She pulled herself up onto the bank and hopped to her feet, running to the bridge to cross back to the willows.

She leapt over the ditch on purpose this time. A thrill ran through her as she flew- the ground dropping away from her feet- and then the exhilarating moment came when she let go of the branches and she soared. With a loud squeal, she landed on the verdant grass on the other side of the stream. Her brothers put down the ball they were playing with and hurried over to the willows, kicking up the dew in the grass as they ran.

Lynn and her older brother hadn’t gotten along this well in a long time. As they jumped and swung and flew, they laughed and challenged each other to more daring feats. The willows, for that afternoon, brought them together in a way Lynn’s brother hadn’t even wanted. Lynn began to tell him about the stories, and the fairies, and about listening to the way the stream spoke.

The willows attracted more and more people as the morning went on. Older kids joined in the fun- one as old as eight, who seemed practically like an adult to Lynn. Her quiet haven was gone, but this was far more fun. She was meeting new friends left and right. Everyone wanted to learn how to jump, and Lynn was happy to teach.

Amid the stampede of children, there was one girl who Lynn didn’t know at all. She was Lynn’s age, with dark curly hair and big eyes. Lynn wanted to make an effort to talk to her, but before she could, the girl had reached the front of the line. Fearlessly, she grabbed the bundle of branches, backed up, and leapt.

She hadn’t hit the highest point of her swing when she let go. The line of kids gasped collectively. Lynn stepped to the bank of the stream with a little shriek as the girl fell through the air, landing in the stream with a splash.

There was a moment of shocked, silent horror as everyone realized that the girl was shorter than the edge of the ditch. The girl tried to climb up the edge, but the grass was wet and slippery and she slid back down into the water. Her eyes brimmed dangerously with tears. The rest of the kids huddled in a group, whispering and pointing, debating who to send for an adult. The girl’s eyes overflowed and her hot tears dripped into the frigid water. Lynn almost started crying herself.

Lying carefully on her stomach, Lynn reached her arms out to the girl. The girl tried to grab on, but her hands were too wet and slippery. Lynn could feel the icy cold pallor of the girl’s skin before her hands slipped free, and the girl began to shiver. The other kids were still arguing over who would get an adult for the girl, and Lynn knew it was up to her. Swinging her legs over the edge of the ditch, she slid down part of the way towards the stream. The girl put a hand on Lynn’s leg and pushed herself up, clambering out of the ditch. Once she was out, she reached her hand down to pull Lynn up. Out of the ditch, Lynn took off her sweater and wrapped it around the shivering girl.

At lunch, she found out that the girl’s name was Rebecca. Rebecca was goofy and adventurous, and she loved Lynn’s stories. They were instant friends. It was a day they would never, ever forget.

Years had passed. Lynn and Rebecca had visited the willows at the retreat center every year, and were as good friends as ever. The stream still burbled the same tune, and Lynn and Rebecca still giggled over meals and sat by the stream in the mornings.

They were too old now, according to Lynn’s mother, too big to hang on the willow branches. It was a part of growing up. Lynn didn’t want to grow up. All of the fun things happened when you were little, like games and recess and princess birthday parties. All grown-ups ever did was talk. They were eight now. Lynn still wore colorful skirts and danced in the dew, but she knew that in a few years, she would be too old for such antics.

Without being allowed to fly, Rebecca and Lynn had to content themselves with creating fairy tales another way. They wove crowns from fallen willow branches, crowning each other queen and running all around their kingdom. The willows were their palace, the bridge their stables, and the playground with the ship was where the sea monster would come to attack them. One year, a grown-up even agreed to be the sea monster, roaring at the girls and trying to reach up and tickle them.

Lynn and Rebecca were at the age now where they could run around without a parent watching over them all the time. They ate meals at a table full of kids, loudly talking when they weren’t stuffing their faces. It was a perfect weekend every year. Perfect for fairy tales.

Years had passed. The ship playground had been torn down; a shiny metal one was in its place. Lynn and Rebecca sat under the willows and talked about boys and makeup and they never once mentioned flying, or princesses, or dragons. Rebecca didn’t seem to mind. Lynn missed the old days, but she was happy to be with Rebecca. Maybe Lynn just wasn’t growing up as fast. She was ok with that.

They fed the fish at the lake at the end of the stream with bits of bread and sat on the dock watching the geese on the water. It was peaceful, in between games and activities, the silence punctuated by low voices and giggles.

Years had passed. One of the willows was gone; a stump was in its place. Lynn and Rebecca were too busy to sit under the willows. Still, they spent the days together, laughing and talking and participating in the activities. Though one of the willow trees was gone, Lynn could still watch the children swing on the other. She felt a sense of pride that her tradition had continued for this long.

Years had passed, but these years had been different. Lynn and Rebecca had barely seen each other. Sure, they texted, but Rebecca had pulled away from the community. The retreat hadn’t happened in two years. Lynn tried to blame pandemics and screen time limits but the truth was that they were growing apart.

Lynn stopped imagining flight, after a while. She was too old, after all. Too old for imagination or willow trees or colorful swirling skirts.

Or so she thought- for when she saw Rebecca again, it was as if time had stopped and the girls hadn’t aged a day since they’d last been together. They’d grown up together, like the willow trees. The only difference was that they’d been able to support each other, and so neither of them had ever really been cut down. 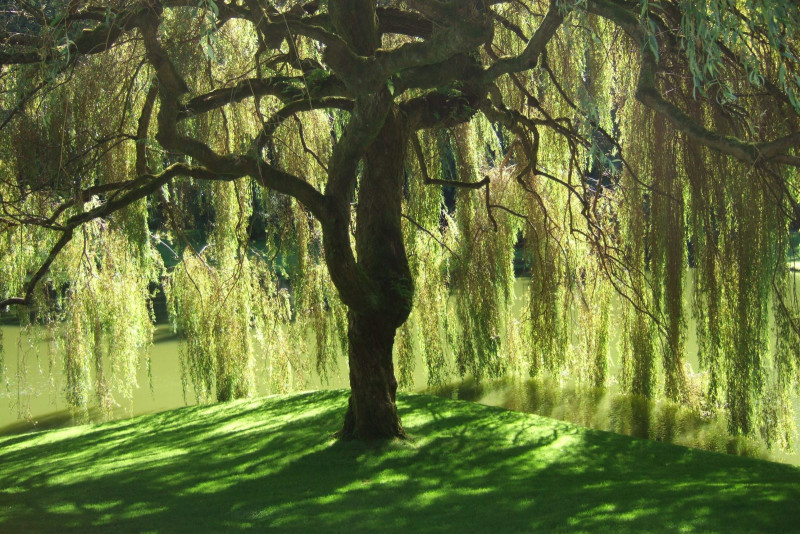 As time passes, the main character describes less and less, to show how her childhood imagination is leaving and she's becoming more dry and adult. Each time the phrase "years had passed" is repeated, the story is meant to become more poignant, akin to a poem.