Based on the novel by James Ellroy and directed by Curtis Hanson L.A. Confidential (1997) is a neo-noir film that delves into the corruption of Los Angeles and the police force that prides itself on "upholding" justice. The narrative unfolds through the alternating narrative perspectives of three very different detectives - Exley, White, and Vincennes - as they attempt to solve a string of seemingly unrelated homicides through the employment of questionable methods to get what they want and uncover the truth. The established elements of the neo-noir genre, such as setting and the reinvention of stereotypes, defines character development and transforms the structure of the narrative in order to emphasize how characters interact with their environment and convey certain messages.

Aside from the neo-noir genre L.A. Confidential could also be categorized under the sub-genre of L.A. noir due to the prominence of the mise-en-scene, specifically the setting, in the scope of the narrative. Los Angeles not only exerts overwhelming influence on the characters of the film but molds itself into a character that is a "source of all things possible in the realms of wealth, technology, power and fame" whom White, Exley, and Vincennes can and do interact with (Orr 8). The city reflects the moral decay of its inhabitants and visually deceives both character and audience by masking corruption and danger through the glamour and excitement of Hollywood. The city is saturated with an excess of violence and crime "epitomized in the fragmentation of power and discontinuities of access" to it (Shefrin 3). The superficial aspects the city presents are enough to threaten the protagonists' morality. Their subsequent actions can either secure redemption for them or drive them further to the temptation of possessing power and acquiring prestige through it.

L.A. Confidential boasts a complicated plot progression driven by the depth of the characters that populate it and the complex nature of their relationships. Representing an altered version of the hard-boiled detective stereotype Jack Vincenne's cool, sleazy persona is a reflection of his attempt to adapt to the reality of his surroundings. His unethical business relationship with Sid Hudgens, the reporter of the seedy tabloid Hush Hush, is an example of how Vincenne's has altered his perception of what he considers moral and acceptable in order to live with the consequences of his involvement with Hudgens. The audience visibly witnesses Vincennes' progressive character development as his belief system is altered when a set up Hudgens' had conceived results in the death of an aspiring actor prompting Vincennes' to feel indirectly responsible for it. Vincenne's suave and otherwise emotionally detached character sees the extent to which he has been corrupted by the promise of fame (Keesey 40). Vincennes decides solving the murder is the only way to redeem himself and despite the snitch stigma attached to Ed Exley that could potentially ruin the image he has worked to so hard to cultivate, he partners up with him. This unlikely duo parallels and is a precedent to the Exley and White partnership that develops out of necessity after Vincenne's death.

Due to the reinvention of certain aspects of the neo-noir genre, the characteristics of the stereotypical detective, equal parts tortured and brilliant, were altered to adhere to the verisimilitude the narrative tries to present to the audience. Despite displaying a strong sense of morality and possessing a shrewdness necessary for the job, Ed Exley attempts to obtain recognition and honor by eliminating his enemies from their position of power. The film presents him as a straight-laced detective whose "own goodness and rightness makes him easy to manipulate" (Keesey 41). The corruption of those around him almost takes over as Exley tries to solve the Nite Owl murders on his own in an effort to impress his superiors and live up to his father's name. However, this blind ambition has made him susceptible to the temptation of personal power in any form which Lynn Bracken and her employer manipulate such as when Lynn seduces him by telling why she prefers White, someone he deems intellectually inferior, over him thus daring him to claim her as a conquest. While Exley is an example of how the persecution of power can corrupt even the most moral his partnership with White reveals Exley is adapting so that he may live with the consequences of his actions.

Initially, Lynn Bracken appears to embody the conventional traits of the femme fatale of classic noir, but a closer look reveals a multi-dimensional character who has a more complex role within the narrative. The sexual and mysterious aspects of her persona are emphasized when she is first introduced to Detective White in the liquor store. Her blonde hair and pale skin appear to glow in the dimness of the store and accent her deep red lips; she resembles a high society lady rather than the high class call-girl she is later revealed to be. Having witnessed White's sensitivity to acts of violence on women at a domestic disturbance, the audience can clearly see how Lynn is, at that moment, the physical manifestation of everything White holds in high regard: beauty, intelligence, and the essence of purity. The duality of her identity, a prime femme fatale characteristic, is not binary meaning she is not the treacherous temptress passing for the damsel in distress. She is the highly sexualized version of Veronica Lake for the purpose of her job but behind closed doors she is an intelligent woman of humble roots physically shown by the separate bedroom Lynn sleeps in when her clients have gone. Though the fascination, typical of noir film, the femme fatale evokes in the detective is due to her sexual yet vulnerable appearance Lynn manipulates her sexuality in order to survive. As she breaks out of the limitations of the femme fatale, Lynn simultaneously leads Bud to the truth of the Nite Owl murders and police department corruption by showing him he possesses the ''analytical prowess associated with an intelligent homicide detective" (Hare 218).

The film opens under the voice-over narration of Sid Hudgens which acts as an introduction to the scandal, corruption, power, and deception that govern the city of Los Angeles. The focus, however, remains on the progression of the plot which relies on the linear chronology of events, where the procession of one event following another must create a movement forward in time. This is particularly important in a film that deals with several murders, some of which date prior to the commencement of the film. There is also the case of the narrative frequency of "Rollo Tomasi" which requires the audience to pay close attention to the events of the film because the name provides Jack Vincennes' with his moment of redemption whilst revealing the true nature of Dudley Smith. First mentioned by Exley as the name he gave the man who murdered his father when he was a boy, Rollo Tomasi serves the purpose of centralizing the plot and bringing together all the perspectives; it creates a name for an invisible threat that proves to be the main antagonist. The importance of the name Rollo Tomasi is that, besides being Vincennes' last words, it represents the dangers of human curiosity. This is shown when Dudley Smith unknowingly reveals himself as the mastermind behind the Nite Owl murders and as the one responsible for Vincennes' death when he casually asks Exley who or what the name means. It is a clever tactic used by the film that gives the protagonists' an upper hand and further pulls the audience into the narrative.

The Neo-noir genre and L.A. subgenre allow L.A. Confidential to explore multiple themes in the diegesis of the film such as the nature of man and his role in a society destroying itself from the inside out while adhering to the mystery and suspense of the detective story. The trauma of the neo-noir characters' pasts determines their actions and thus drives the narrative to certain plot points. Bud's mother's death at the hands of his father, for example, strengthened his resolve to protect women in similar situations and eventually lead him to Lynn, who by making Bud realize his true worth and potential indirectly forged the significant alliance with Exley. Plot twists due to the duplicitous nature of certain characters, such as the Chief of Police, complicate the narrative almost to the point of confusion but if utilized correctly create a chilling and complex story worthy of film noir, classic or modern. 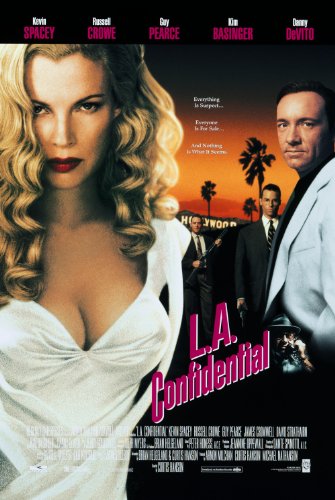 
Buy from Amazon Available on iTunes
The author's comments:
This was my final paper for my Film Aesthetics and Analysis class.
Post a comment
Submit your own